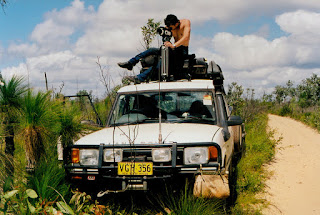 Prior to Dan's injury he served five years in the Australian regular army. Qualified as a paratrooper, APC tank and Unimog driver and scoober diver in the Signals corp.

He has experienced many expeditions throughout remote Australia in every state and territory including Cape York, the Gulf of Carpentaria, Northern Territory and Western Australia. These journeys have been in many different types of transport from helicopters to large fishing boats. Dan has also completed his pilots license.

As a qualified secondary teacher Dan has had the fortune of teaching in many remote schools in Indigenous communities throughout Australia. However, his main activity prior to my injury was rock climbing and he is still climbing post injury. Although his climbing now is mainly overhung second top rope, which he enjoys more than breathing.

Since his injury Dan has had several notable climbs such as the east face of Uluru and the 'Dog Face' in the Blue Mountains. Dan continues to train and explore methods of assistive climbing using tailored aids such as modified cams etc.

Dan is also a practicing artist working predominantly in interactive sculpture through mediums of projection, photography, film making and installation. With a masters in education, visual arts, and professional practice, bachelor degree in fine arts and Honors 1st Class contemporary arts. Being a presenter at various contemporary arts seminars and placements such as artist in residence has enabled Dan to travel throughout remote Australia in Indigenous communities, as an invited artist working with youth at risk, and the general teacher cohort and community.

With a Diploma in film production UNSW 1st., and a Diploma film/video editing, (AFTRS NSW) Dan has no shortage of film-making experience. He has written and directed several short films receiving awards for both direction and editing. (some EGs would be good here) The latest exhibition works have won several awards including:


The next twelve months will see a focus on film based practice inspired by future travels to remote Australia.
By Walter - February 09, 2016