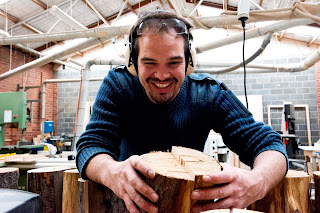 Born and bred in Hobart Duncan has had a keen interest in the environment for a long time. He is a furniture and lighting designer creating works inspired by the natural environment. The interest in how light performs through and around objects coupled with the highly tactile nature of his work reflects the alternative sensory world in which Duncan Designs, being legally blind.

In 2005 at the age of 18, Duncan lost his central vision due to a condition call Lebers Heretarary Optic Neuropathy (LHON), leaving his Legally Blind, with less than 5% vision concentrated around the periphery.

Duncan has won a number of awards including:
He has spoken at national conferences organised by Arts Access Australia (2010 and 2012) and has been part of a number of exhibitions, including his own solo show earlier this year, Duncan has attained a range of national and international media attention.

Duncan has been featured on the

As well as his practise Duncan partakes in adventures and activities including tandum bike riding, kayaking, bush walking and rock climbing. Rock climbing is one of Duncan’s central passions. He has climbed in a number of places including Paynes Ford and Kawakawa Bay – Lake Taupo (New Zealand), Frog Butress (Queensland), Mt Arapilies (Victoria) and a number of locations in Tasmania. One of his favourite styles, prevalent in Tasmania, is Crack Climbing. Duncan has done some leading on routes and was able to do a first ascent with Paul Pritchard in 2010 of ‘The Blind Leading the Crippled’ 16, at Waterworks near Hobart.

Duncan worked with Kanthari in India in 2012. Kanthari has a strong aim about empowerment and disability, something which Duncan is quite passionate about himself. His practise embodies his disability, it does not hamper or dominate it but influences his design aesthetic. Equally his life is influenced by his disability, but has made it turn in some interesting and unique directions.
By Walter - February 09, 2016