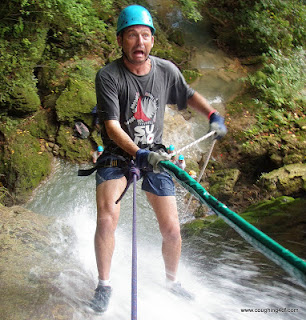 Born in Holland with Cystic Fibrosis Walter was undiagnosed and labelled as a sickly child with a cough and diarrhea. When he had not grown past 35kg for three years Walter was finally diagnosed at age 10. His family migrated to Australia to escape the 'Cold War' and for him to get fresh air and get away from the cold and damp weather in Holland
In Australia Walter became a keen bushwalker from High School bushwalks onwards to exploratory hikes in later teens.

However, it was while cycling around Tasmania to save the Lower Gordon River with Bob Brown and the newly founded Wilderness Society that he was bitten by the travel bug. Walter has scaled a Greek prison wall,  lived in a cave in Crete, took the Trans Siberian, contributed as a medic to the 911 emergency in New York and worked for Save the Children in New Zealand among many many other out there adventures.

Though Walter was often sick with Cystic Fibrosis related complications, coughing up blood and having chronic infection, diagnosed with CF related Diabetes, his life is dominated by exercise and therapy. Technically being on borrowed time, 'living on the wrong end of the bell curve', he is now an inspiration to the world CF community who got to know Walter after he cycled from Paris to Istanbul in 2007 for the cause. Money was donated to CF, media coverage included CNN, a book and a documentary (Coughing the Distance - <http://vimeo.com/1235023?pg=embed&sec=1235023>) resulted from this 3500km bicycle ride and that led to him being awarded an Order of Australia Medal in 2009.

Following the cross Europe bike ride he climbed Mount Kinabalu in 2009, rode 1000kms from Sydney to Melbourne on a Dutch City Bike, completed a two month 5500km electric assisted bicycle ride from North Vietnam to Singapore and made a 1000km hike across Spain, the El Camino de Santiago from the French Pyrenees to Cape Finisterre. In 2015 he crossed the Nullarbor on an e-bike and hiked 1000km across WA on the Bibbulmun track with friends.
Walter now lives in Tasmania.
By Walter - February 09, 2016