From Tasmanian Parks and Wildlife... 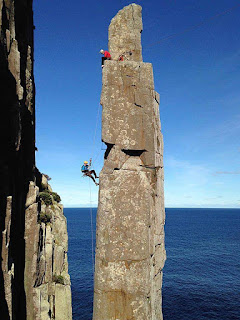 Three Capes Track and Cape Hauy day walkers were witness to a remarkable event a few days ago:  the return of Paul Pritchard to climb the Totem Pole.

Only 20 to 30 climbers attempt to climb this 60 metre high dolerite pillar each year.

In 1998, Paul was making his first climbing attempt accompanied by his girlfriend, when just a few minutes into the climb, a falling rock cracked his skull. With nobody else on the cape that day, Celia rope-hauled and secured him to a safe ledge (which took 3 hours), then climbed her way out (an extraordinary feat unaccompanied) and ran to Fortescue Bay to get help. By the time help arrived (another 5 hours later), Paul was barely conscious.

Paul lives to tell the tale but has been left with permanent leg and arm injuries.

On Monday, Paul returned to the Totem Pole to finish what he started 18 years ago. After 6 hours, with one working arm and one working leg, he succeeded.