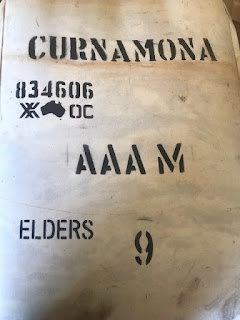 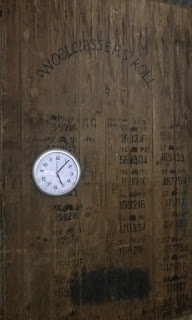 Day 15 Curnamona - Yunta 68km
We awoke in as if in a stage set in a shearing shed. We found the shearing shed one of the most wheelchair friendly environments we had been in so far. The ferocious headwinds had died but were forecast to return. We had a day of dirt ahead of us on the Tea Tree Road. It was more slow going on soft gravel sometimes a full 30cm deep. The occasional Road-trains engulfed us in dust. With about 15 km to go Conrad got his beer goggles on and sped off. We couldn't see him for dust!

In Yunta we had a well earned beer and counter meal  and slept in our swags by the children's swimming pool which resembled Stalag XIII-C with the amount of barbed wire around it. We drifted off to sleep with a road-train lullaby. 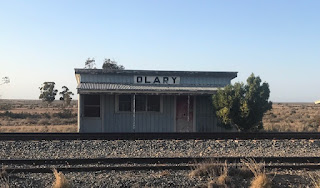 Day 16 Yunta to Olary on the Barrier Highway. 78km.
Even though we hit a T junction at Yunta and turned dead east the wind swung around to a cruel Easterly headwind. We battled up the 10km hill out of town and was told by Ed that we needed to get off the road when the three carriage Road Train passed us as they are wider than a lane of the highway. We pulled into Manna Hill where we met the eccentric publican Di. She warned us of the lead contamination from the lead freighters that used to pass by and had a bizarre collection of mining paraphernalia that occupied so much room in her pub it was more comfortable to sit outside. Then onto Olary were Conrad and Wally arrive by torchlight for the first time on the trip. We were now looking forward to Broken Hill (117km away) and a rest. 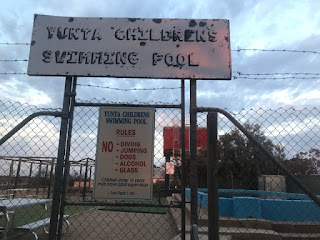 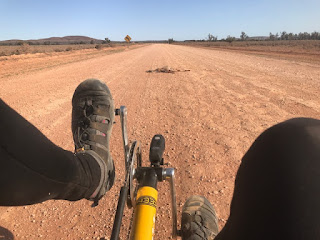 Day 17 Olary to Cockburn. 70km.
We had meant to ride into Broken Hill today but were hampered by an increasing and demoralising headwind. We were averaging 9km per hour up to Mingarry. On the map Mingarry had a petrol bowser symbol and a Knife and Fork symbol. So, in the heat, the team dreamed of air conditioned diners and burgers. When we got there the whole town of Mingarry had been demolished long ago. All that was left was a water tower with the taunting word TEA painted on it. After 27km more punishment we arrived at the moon of Tatooine, sorry the community of Cockburn.  Sat on the porch of the Coburn Hotel one could be forgiven for hallucinating Luke Skywalker zooming past in his Landspeeder. In fact one local with a massive beard and no shoes on, commented on how the Aliens were coming soon to Cockburn... The team split up for the night here with Conrad and Walter staying at the friendly Coburn Hotel and the others going ahead to drop Daniels bike at the bike shop. The other enjoyed the hospitality of our couch-surfing host Toni. 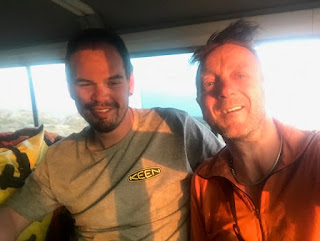 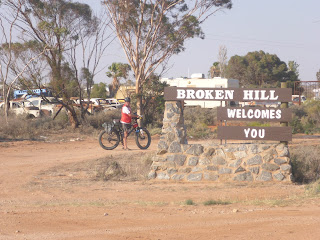 Day 18. Cockburn to Broken Hill. 48km.
After dropping the Dan and his hand trike at the bike shop Duncan, Paul and Ed returned to Cockburn to rejoin the group and start the day. We were all tired and emotional and Duncan had mild heatstroke. The temperature had risen to 39C and the wind was now a gale of 50km an hour with gusts of 80km. After discussion  we decided to put the Tandem on the roof and Duncan and I sat this leg out. It was now up to Walter and Conrad to brave the wildly veering Road Trains and blistering heat.
They rolled into our couch-surfing house in Broken Hill with tales of freewheeling at 25km an hour on the bottom cog up long hills. Good to have the team back together again for a much needed two day rest.