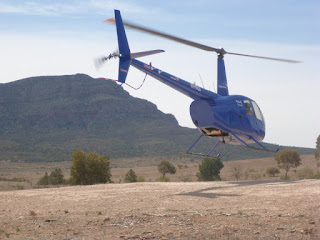 So let's have a recap. We had a very tough long ride around the back of the Flinders Ranges, up and down on a sealed road on which Walter's fat Kona bike was finally beaten by the others. Walter and Conrad struggled into the campsite and as they were looking for the team found the pub. A quick beer with the local helicopter pilot Paul, who even bought us a second beer and shared his pizza, resulted in all of us going up for a scenic helicopter ride on our first rest day. Pilot Paul even met us after dinner on the last night at Rawnsley Park and slipped us the phone number of the kind people at Martin's Well, our next destination. 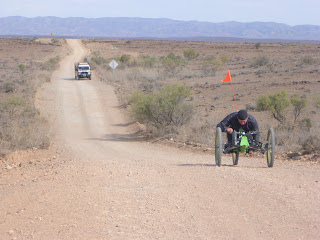 Though we had our first rest day we hardly felt ready to jump on our bikes at 7am, but slowly we all left by about 830am heading for the black stump and beyond; Martin's Well. 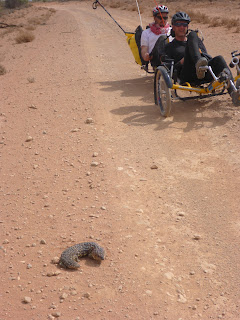 The wind was not totally against us, but it was a tough slog all day, averaging under 10kmphr. Rice rolls for lunch in a river bed, several emus and dozens of roos later we rocked into Martin's Well just in time for sunset. 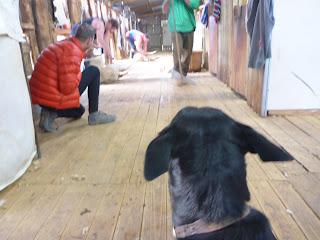 The manager there kindly allowed us in the shearing quarters and so we had the choice of shearers beds or trusted swags. Even a hot shower and use of a kitchen, BBQ and a camp fire. Surely this would prepare us for the next day, and equipped with a Curnamona homestead contact who Norton the station manager at Martin's Well called for us we had all we needed for our next day well beyond the black stump. 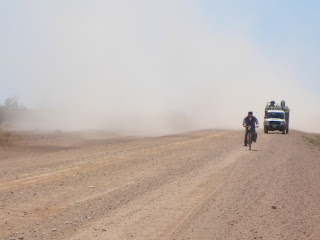 After breakfast we checked out the guys doing  some crutching on the sheep, shearing their hind quarters, readying them for next week's sales.  Another sunny day for us amd with a slight breeze blowing in our backs we left with a comfortable pace along the corrugated dusty and rocky road. 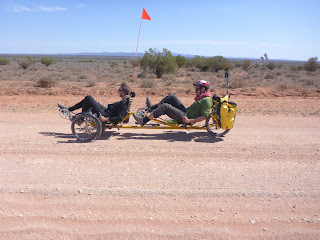 Trikes bounce along hard with three tracks ensuring no rocks are missed anywhere on the road. Conrad is now on the emergency bike since the trike he was on was cannibalised to fix the tandem trike earlier in the week. Though he may be better off in general he is now forced to get used to numb fingers and a sore bum. He had to take some extra medicine with our early lunch at Erudina in a small dust storm whipped up by increasing winds. 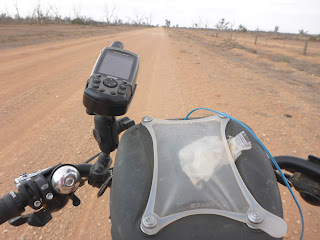 The next 40kms left to ride for us after lunch proved to be a challenge with changing winds that not only got stronger but also turned against us.

Cycling along these roads is a constant challenge of finding a line that is smoothest and avoiding rocks and sandy/dusty bits. Rocks fly into Duncan's face sometimes as he pedals the tandem. If you do look straight ahead you often see a couple of roos crossing the road. 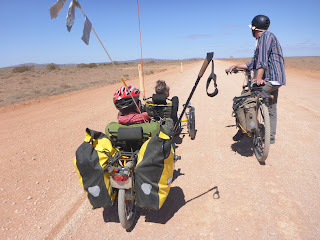 Shortly after lunch Dan's trike developed a serious issue with its gears, causing him to only have the lowest gear at his disposal. He had to be rescued by the sag-wagon as the rest of us battled the winds to arrive at Jeff's shearing shed at Curnamona just before sunset, broken and exhausted.

Ed met the lady of the homestead  and asked for the nearest  shop, as it has been a few days since he shopped at Hawker... he immediately received a generous serve of lambchops, mince and eggs for  us! Ed cooked dinner and we hit the sack with no illusions of an early start the next day. Let's see what the winds have in store for us as the current headwind gales will make life tough for us . 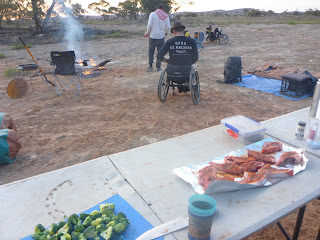 Over and out Roger.