Well, the first three days are over and we are at the Marree Hotel Campsite. 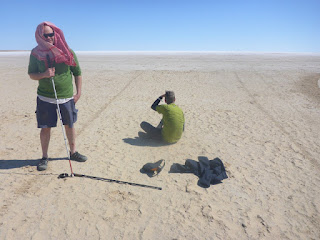 Day 1.
Kati Thanda to Annabel Island. 20km.
We arrived at the vast salt lake. What a sight was the shimmering dry lake. There was a monument toDonald Campbell who broke the landspeed record in Bluebird and a Dreamtime story of how Kati Thanda was formed when a a hunter killed a giant kangaroo and laid its pelt down. We could not ride on it out of respect for the Arabana people so the team set off from the car park 100m from the lake. Pauls ribs were still very sore and he was having difficulty breathing so he would not join the rest of the team on what turn out to be two days of washboard hell. We had to assemble the trikes ad bikes and so the team didn't get away until 2pm. As they rode the 15km to Annabel Island the sun set into South Lake Eyre, and the full moon rose at exactly the same time. Even more beautiful was when a dingo ran across the full moon.


Day 2.
Annabel Island to Moolarina Homestead. 26km.
Paul dipped out again as Conrad took his place being Duncan's eyes on the tandem as Walter made good time on the fat bike. Daniel needed his hand trike charging at the homestead so took a rest too. It was more sandy washboard and Duncan and Conrad had to resort to pushing the trike on several occasions. But they rolled into camp at 2pm. 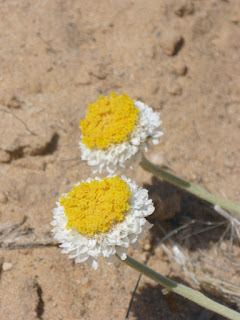 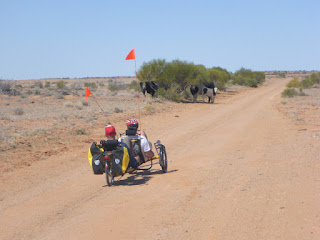 Day 3. Moolarina to Marree. 54km.
The whole team started for this one even though Paul was still in considerable pain. We made a good start averaging 10km/hr on the dirt road. As a headwind got up this momentum was a struggle to maintain, yet we made 26km in three hours and stopped for lunch at an outback oasis (a water tank). After lunch Paul felt like if he did anymore he might damage himself and so jumped in the troupie. Conrad took Pauls place again on the tandem while they Took off for the remaining 24km. Shortly after lunch Dans battery died and he had to work hard to make Marree. One problem in the chest steering pad that is bruising his sternum on the rough road. We will have to seriously look into how we are going to address that if all 5 are going to make it to Kosciuszko. 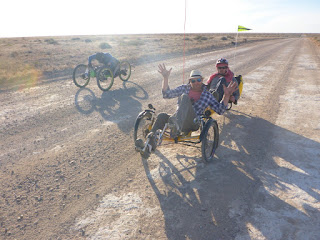