Daniels trike was brought to Ricks Town & Country bike shop in Broken Hill as Conrad and Walter braved the 80kmphr gusts into town on Saturday. We were extended a warm welcome by our friendly couch surfing host Tony and daughter Evelyn and one of their pet goats.  The goat promptly peed on Duncan as we made ourselves comfortable in her house. 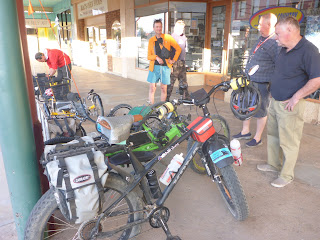 On Monday Daniel and Walter spoke to the ABC in town as Conrad, Duncan and Paul fixed the trikes with spare parts that had been sent. We did our shopping, had our bikes looked at by Rick, had a few beers at the Workies club and met Greg and Di. Greg was recently diagnosed with Motor Neuron Disease and is in training for a charity ride to Menindee next month! 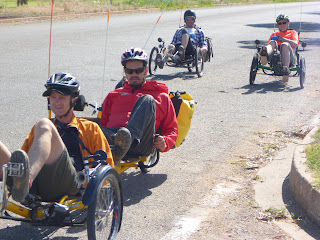 On Tuesday when it was clear that Daniels trike would not be ready for a while we took up Greg and Di's offer to let Daniel stay with them till it was fixed. And Greg took off with our now  short handed team to see us off for the first 20kms South along the Silver City Highway towards the Murray river! Emus ran alongside fence lines in front of us as we dodged goats and roadkill kangaroos onpy to end up at a caeefully selected  bra tree for lunch. 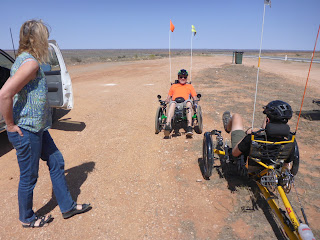 The wind was mostly in our favor as we beat out  a good 80+ kms to a cozy spot along the highway where Ed our World Expedition driver set up camp and cooked snags for us. We lost half an hour crossing the time zone into Victoria! 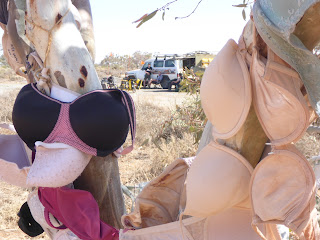 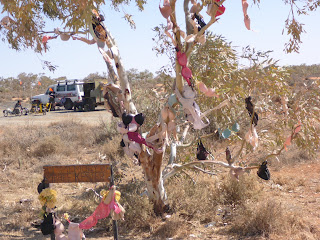 Wednesday we had planned to ride 90+ kilometers to a Wiki Camps advertised 1 star possible camp site.  Stopped at a road house for lunch and got back on the road with caffeine (Red Bull) after spreading our propaganda to innocent bystanders. 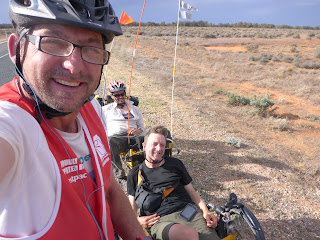 At about the 85km mark, just passed where we reached our 1000km mile post (!) the Tandem's chain developed issues and as Conrad was pacing for a first position in the peleton (fueled by the clandestine caffeine boost) the rest of the team tried in vein to fix the problem. 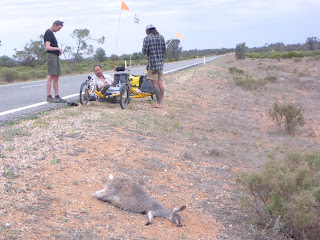 Ed came back looking for us to say the camp was so lousy he took the initiative to continue another 25km to the Darling River crossing rest stop.  By now or was almost dusk and we had 30kms to cover with a broken Tandem the gear was loaded onto the Troopy for an emergency lift to camp. 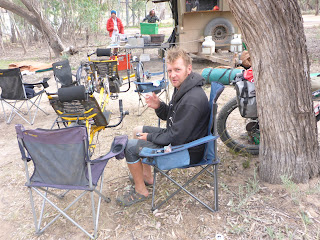 In the mean time Conrad's drug fueled frenzy had not worn of yet as we passed him 10kms from camp where Walter was ejected from the Troopy to join him. 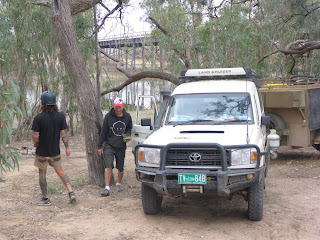 And this is how we ended up at the idyllic campsite under the Silver City highway bridge. Conrad had completed 117kms today, a record for the team and a PB for himself!