Realising the challenge is huge 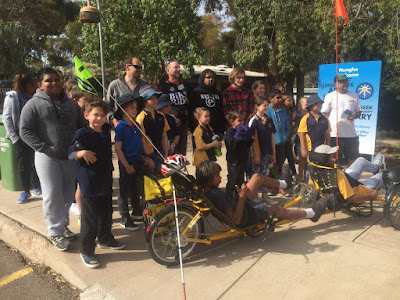 We are a long way from being hardened outback riders we discovered. After shaking of bulldust in front of a small crowd in Marree on Friday afternoon we parked the Troopy and the trailer in the dusty square camp ground next to the pub.

We were pretty beat and decided that the next sector could be staged from this comfortable spot. And so we had a leisurely start on Saturday morning, braving the by now mostly reasonably surfaced dirt Outback Highway to Farina. The scenery remained mostly flat and dry, with the 'flat' inclines being about one meter up or down over several kilometres. The wind was not exactly favourable, but also not dead set against us, and we managed about 7-8kmphr.  We had to stop regularly to recover from the beatings received on the corrugated dusty road. One moment we all enjoyed was passing a wedge tailed eagle feasting on road kill, as the odd emu nervously ran around the fields fleeing from our cameras. 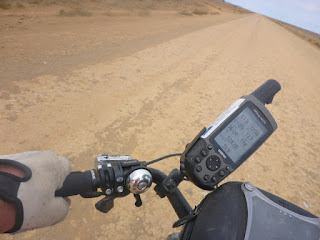 At the end of the day, after sone actually sealed road sections, and under a spectacular sunset we neatly hid our Greenspeed trikes and the Kona fat bike amongst the thistles well off the road at the Farina turn off. Ed came in the support Troopy with Walters combination bike lock (which he had skillfully picked for us as Walter couldn't remember his usual code), and returned us to the Marree historic township where we had our swags waiting in the dirt. 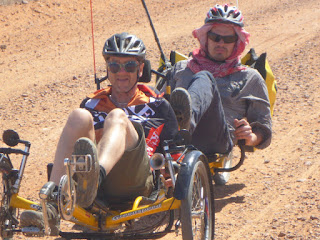 At this stage Dan had been suffering for a while and took the morning off to see the Marree nurse, while the rest of us continued South.

We rode past historic remains of cottages built for railroad maintenance workers on the Ghan railway which housed 2-3 workers every 30kms or so.

As we rode along bits of dirt and bits of tarmac with what had now become a slight tailwind Ed caught us at Lyndhurst, a truck stop with a small hotel and an 'almost grassy' camp spot with mean emus which we were warned about.

Though not on our schedule as a stop Ed came with the news that Dan needed to see the doctors 300kms away in civilisation, and we decided to call it a day. Ed dropped the trailer amongst the rodent emus for us and took Dan to the hospital in Port Augusta. Not nice to see Dan leave us temporarily with a suspected kidney infection, but we were pleased to have a beer instead of pushing on. Dan will join us again later.

Ed appeared from Port Augusta when we were still clambering over the one seat with phone reception at the hotel and finishing coffees.

Today's ride was not that hard, another half day of riding on now all tarmac with a tailwind through undulating dessert scapes with evidence of mining in the distance on one side and beautiful hills in the distance with clearly visible 'geological features'. We stopped at a road kill eagle to salvage a feather or two, and raced past many other roadkill varieties that stank too much to stop; mostly emus and kangaroos.

The driving factor for today was to get to the Leigh Creek Area School to speak to the children there, our first public engagement! We got to the Coply Bush Bakery & Quandong cafe 5kms before Leigh Creek in Copley in time for a quick pie before heading off to the school talk.

The talk went well and we enjoyed meeting everyone and edumacating them in adventure, dispelling myths about disability and inability, the importance of helping each other and following your dreams :)

To top off a wonderful day we were welcomed  by the one and only #outbackcop from recent 'The Project' fame for the night to enjoy the luxury of a real home and a laundry!!! Complete with road rescue Joey, dogs and showers we enjoyed resting our weary bones for the night.

Tomorrow we have a massive day ahead, well for us anyways, 65km on the schedule!
By Walter - September 11, 2017