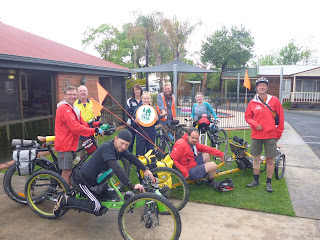 We loved our rest day in a real bed, two nights at the Big4 YHA in Albury was a real treat. Thank you YHA/Big4. Also a quick thank you to Mad Bomber for getting us pizza again :)

Rain or shine, we had to get on our bikes again on monday. And rain it was. As Daniel, Conrad and nurse Vonna headed into the rain  and into the hills Paul, Duncan and Walter waited at camp for a journalist who may still come. This wait coincided with the worst of the rain and thunder. When they eventually did leave, an hour behind the drenched others, with loads of enthusiasm (and still dry) Duncan suddenly developed an injury.

Duncan had a cramp in his thigh which didnt want to go away. We think it may be related to him starting to use pedal cleats recently, but you just dont know. The long and the short of it was that Ed had to be summoned to the rescue and relief Duncan of his duties.  Paul continued on his trusted single trike. 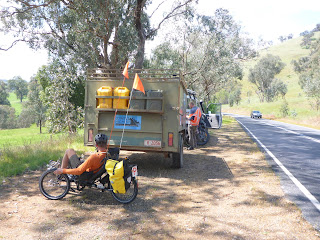 Shortly after leaving Albury in an Easterly direction, following the Murray and towards lake Hume we got our first dose of half decent hills. Most uphills were rewarded with downhills meaning we gained nothing net towards the climb up to Kosciuszko yet, which is now only a matter of a few hundred kilometers away! 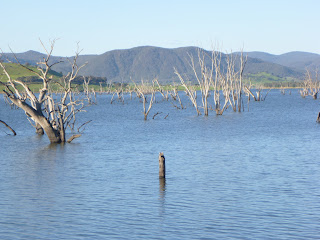 As the day progressed so did the environment. Fantastic minor roads with only light traffic with terrific views of green pastures and treed hills. Lots of birds tweeting us on and cows mooing away. We saw our first dead wombats for the trip and started seeing more road kill snakes. 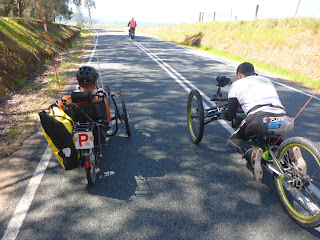 It was a long day for some of us, but Daniel on his newly repaired hand trike got to camp shortly after lunch with nurse Vonna on his tail. Walter and Conrad found a little pub half way to Thologolong and failed the test, they stopped for a beer. Paul resisted the temptation with his trusty swag almost in smelling distance. 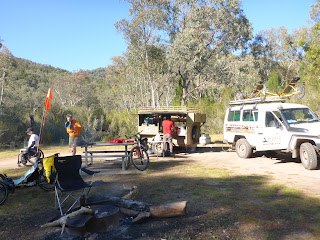 Ed found us a good litte campsite with a long drop where we enjoyed dinner and a camp fire. 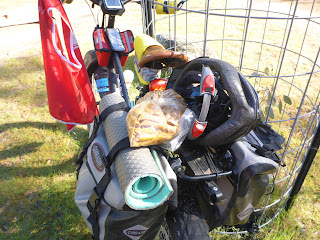 Tuesday morning we headed off East a little earlier as we knew the hills were going to get bigger. And they did. The local hills we were riding past were now almost 1000m high whereas yesterday they were perhaps half that height. The greenery got even greener and the snakes more abundant, with a red belied black snake lurching up for Dans bike/face as he rolled past. Dan reported hitting the snake with his mirror but believed it not to be hurt. 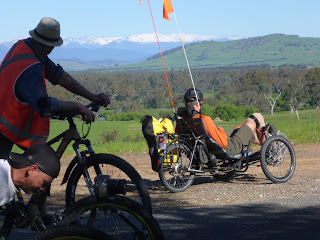 We got our first glimpse of the main range, with (allegedly) GMO canola plantations, lakes, rivers and bee hives.

Ed had prepared a lunch bag of noodles for each of us but fortunately we passed a little hotel in Walwa which forbade us to eat our own food so we bought delicious meals, such as baked trout! Walter found an Invalid Stout to quench his thirst. 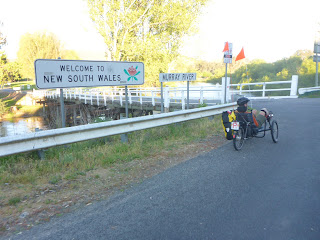 And as per usual we rolled into camp about 630pm after another long day on the bikes. Our day long efforts always remind me of the fact that a marathon runner can run a marathon in 2-3hours but the medal shoud really go to the strugglers who ran as hard as they can for double that time!!! Presumably many cyclists could finish the same distance we do around lunch time, but we only rode an average of 12-4km per hour and stop very often. Walter's GPS often reports 6+hrs riding time and 3+hrs stopping time. 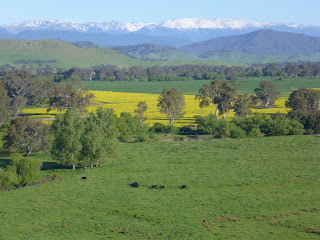 Tomorrow we head for Khancoban where we may speak to a school!!