Roadkill swapped for litter and traffic

Time and distances are now flying past us at a rapid rate. We are doing 80+kms per day as if it is a staple diet. We have routine and the team is well-oiled. We have now acquired and adopted nurse Vonna from Hobart and she joined the team with gusto. Full of good advise and practical help to the team. Her presence is much appreciated. 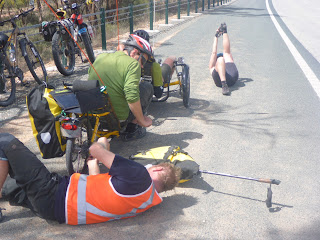 We cycled from Robinvale to Narung where we free-camped along the Murray, a campsite our WorldEx  Ed  found using his trusty wikicamp phone app. The ride was along the most busy Murray Valley highway  which got busier and busier as we headed East. Some sections had little shoulder sadety for us which made the ride quote harrowing at times. It would really help if cars had lights on even during the day!

Now that we are in an agriculturaly rich area with vineyards,  orchards and honey production  (i bought some great honey at Mallee), there is a lot less road kill along the road but in its place a load of manmade garbage. 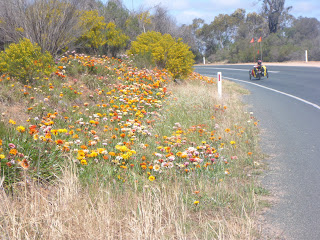 The wind is pretty much in our favor still and we can ride around 15kmphr. thanks to the mostly flat terrain.  This is sure to change long before we hit the Snowy Mountains!

Camping along the river is beautiful now,  though there is a lot now dew and the temperatures are slowly dropping. 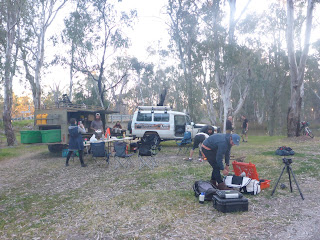 After leaving the Narung river Camp site we stopped for coffee and more breakfast snacks in town, handed out our propaganda postcards and did some shopping (Conrad even found a woolen suit  jacket to ride in from the opp shop and Ed got a new flannelette shirt on special in the local fashion store.

Nurse Vonna was enthusastically cycling behind the tandem trike when Paul at the helm hit the anchor  to avoid a brown snake on the road,  causing Vonna to run into it and fly over Duncan who sensed her flying through the air amd casually caught her in his lett hand. Turns out the snake was already dead from a previous vehicular encounter. Amazingly noone was injured. 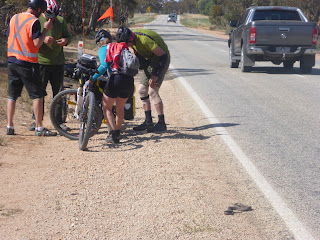 We set up camp at the Big Four in Swan Hill surrounded by hundreds of kids and tourists who weren't sure what to think of our swags and walrer.coughing ans spluttering amongst them during an earlier than usual abridged nebulising session while the rest of the team had Chinese in town. Big Four had offered Walter a cabin to do his nebulising in for a discounted $100 to do his nebulising in. Instead of taking up that offer he  ordered domino's pizza (compliments of www.madbomber.com) and gave the public performance  (which provided more opportunity to Walter to hand out more  postcsrds with our message). 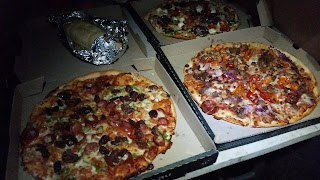 In the morning some of us had a lot of dew on our swags and gear, which will get worse as we near the mountains

By now we had also gained an extra hour of daylight thanks to summer time starting,  meaning we now wake up an hour later with the sun and ride a little longer to dusk. 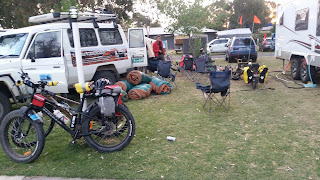 So continuing, after our crowded campsite in Swan Hill we headed off the busy highway and took some minor roads to  Spencer's
Bridge. Walter took a dirt road short cut,  Conrad cossed the river to a nsw pub.for a beer, Vonna took a wrong turn and therandem trike avoided a life snake on the road.

Amazingly we all managed to  arrive at the campsite within  about twenty minutes of each other, the film crew arrived out of the blue as well and a local man calped Greg came along with a few beers and the kind offer for us to use his shower and power for rhe night and to sort out any mechanical issues in his workshop! We sure love hospitality like that, but were too stuffed after the 90÷ kms we had ridden today to go anywhere.... 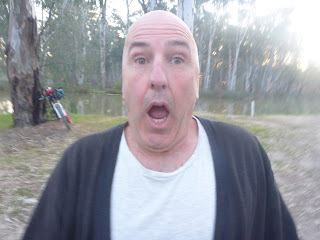 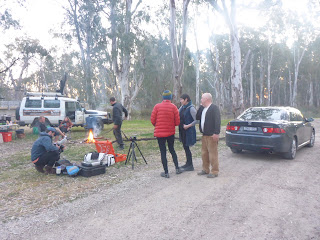